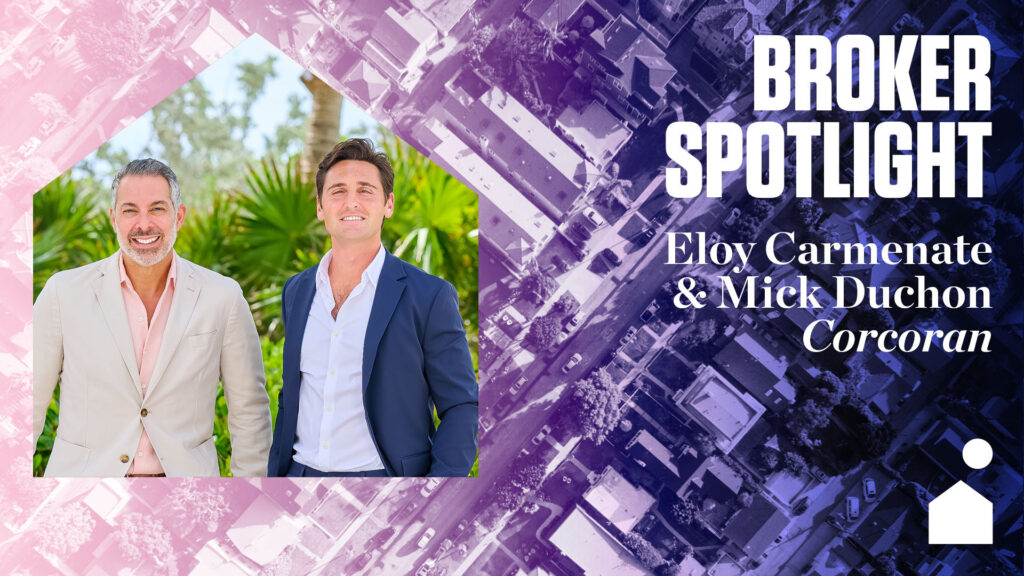 What do you wish more people knew about working in real estate?

Mick: When I started, everything surprised me. It’s an “around the clock” 24-hour position if you want to make this a successful career, and it does seep into your personal life. I rarely disconnect, but due to the Miami market slowing down in the summer, there are times we are able to detach. However, even during that time, we are still looking for new ways to build business.

Eloy: Mick is relentless, and the reason he is so good at his job is that he stays in touch with clients. I wish more agents were more knowledgeable about the market and followed up more. I always say, “Just because they say no, it’s not a no. It’s just a “not right now.” We never take no for an answer.

Both: While we’re seeing the same amount of demand in 2022 as we did in 2021, it has been more difficult to facilitate transactions due to low inventory and high prices. The top-tier houses, lots and condominiums are seeing multiple buyers, and that is driving prices higher.

We’ll also continue to see an influx of people moving to Miami from out of state — New York, New Jersey, Connecticut — and making it their primary residence rather than their second home. Prices no longer allow for the investment home.

We don’t like to make predictions, but in 2022 sales are more likely to go down because of lack of inventory and not because of a lack of demand.

Tell us about a high point in your career.

Mick: Of course partnering with Eloy was a high point in my career, but I would also point to my first $20 million sale in 2016. It completely changed the game for our business because it catapulted us into the single-family homes arena. That same year we sold three out of the seven homes listed above $20 million, and now our business is 60/40 condos to single-family.

Eloy: When I broke the $20 million range, it had never been broken before in Miami. Previously the highest sale was around $12 million, so in 2002 when I did this deal with Ken Griffin it changed the market. The cherry on top? The same day we signed the deal, I broke my ribs. Thankfully Mick was there and basically carried me to the meeting.