Former home of John Steinbeck is for rent on Airbnb 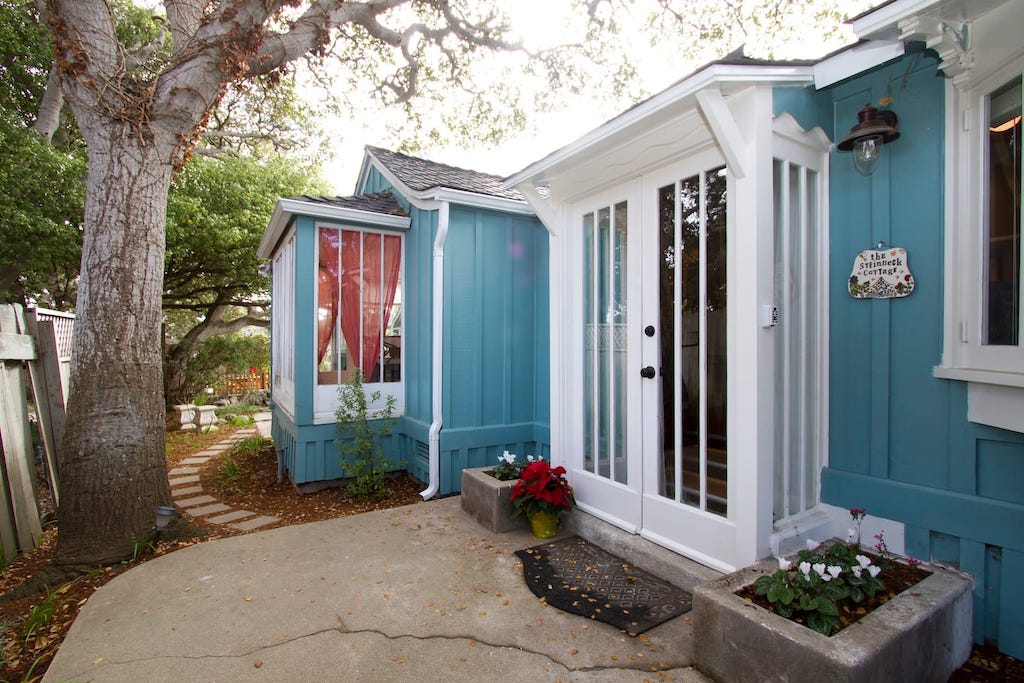 In Pacific Grove, just down the road from the famed Monterey Bay Aquarium, sits the “John Steinbeck Cottage,” a home where the celebrated author of “The Grapes of Wrath” and “Of Mice and Men” lived from 1941 to 1943.

The property is actually made up of three houses, two of which are available for rent on Airbnb. The owners keep the third and smallest cabin unrented so they can enjoy it when they want, something they hadn’t originally intended.

A former vice president at LinkedIn, San Jose resident Kevin Delaney said when he saw the advertisement for the property in 2012, he was intrigued by the Steinbeck history. “I love history. I love literature. I wanted to learn more,” Delaney said. “[The property] was weird and it was in terrible shape, but when I started digging into the history that was the appeal for me.”

When he’s at the house, Delaney said he loves reading a Steinbeck book and learning more about the author’s past. Beyond the home itself, Steinbeck has a lot of history in the surrounding area. He was born in nearby Salinas and grew up in a small rural valley. His father served as Monterey County treasurer for a time and his mother was a teacher. Steinbeck later went on to Stanford, though he didn’t earn a degree.

After a stint in New York, Steinbeck landed in Lake Tahoe, where he met his first wife Carol Henning. When the couple ran out of money after a move to LA during the depression, they moved into Steinbeck’s family’s cottage on 11th Street in Pacific Grove.

It’s in Pacific Grove where Steinbeck met his friend marine biologist Ed Ricketts, who later became a model for multiple characters in subsequent works. Despite finally achieving wide success after recognition for “Grapes of Wrath,” Steinbeck’s relationship with Henning was suffering. Delaney said Steinbeck bought the Pacific Grove property as “a sort of what am I doing with my life” decision.

He began seeing the woman who would later become his second wife, Gwyndolyn Conger, and Delaney said there was supposedly a meeting of the two women and Steinbeck told them to choose who he would stay with. Though legend doesn’t tell us whether he made his choice at that fateful meeting, Steinbeck eventually divorced Henning and married Conger.

While living in the cottage, Steinbeck wrote both a nonfiction book and a screenplay, “Sea of Cortez” and “The Forgotten Village.”

All three homes were built in 1913, though the property was slightly larger when Steinbeck was living there. It changed hands often, and in the 1980s, a developer bought the land and was planning to demolish and subdivide it for future building, but the city stepped in and prevented the destruction because of its historic significance.

The land stayed subdivided though, so the Delaneys own the three homes and part of the original garden, while a neighbor owns the rest of the garden and another garage and building that once belonged to Steinbeck.

The homes are unique, and “The Steinbeck Cottage,” as the biggest house is known, has a large living room with a tent cathedral ceiling. There’s also a grand fireplace, decorated with hand carvings of birds and flowers. There’s a bedroom and additional sitting area, a kitchen and a dining room with a farm table.

The “writer’s studio” is also for rent separately. It has one bedroom with a queen bed and a sitting area, a full bathroom and a kitchen.

In 2018, Pacific Grove cracked down on short-term rentals, and Delaney wasn’t sure if the place would have the same appeal with 30-day minimum stays. Turns out it did, and now the place is often rented out for up to 90 days at a time, he said.

Now, he said the cottage gets all kinds of guests, from avid Steinbeck fans to marine biology researchers to writers who want to “soak up the Steinbeck vibes” and finish their manuscripts there. Delaney himself has written a book and said he did a lot of writing at the house.

Rent the cottage and learn more on Airbnb.