House of the Week: Welcome to ‘Windy Acres’ in Marcellus, definitely not a ‘cookie-cutter’ property 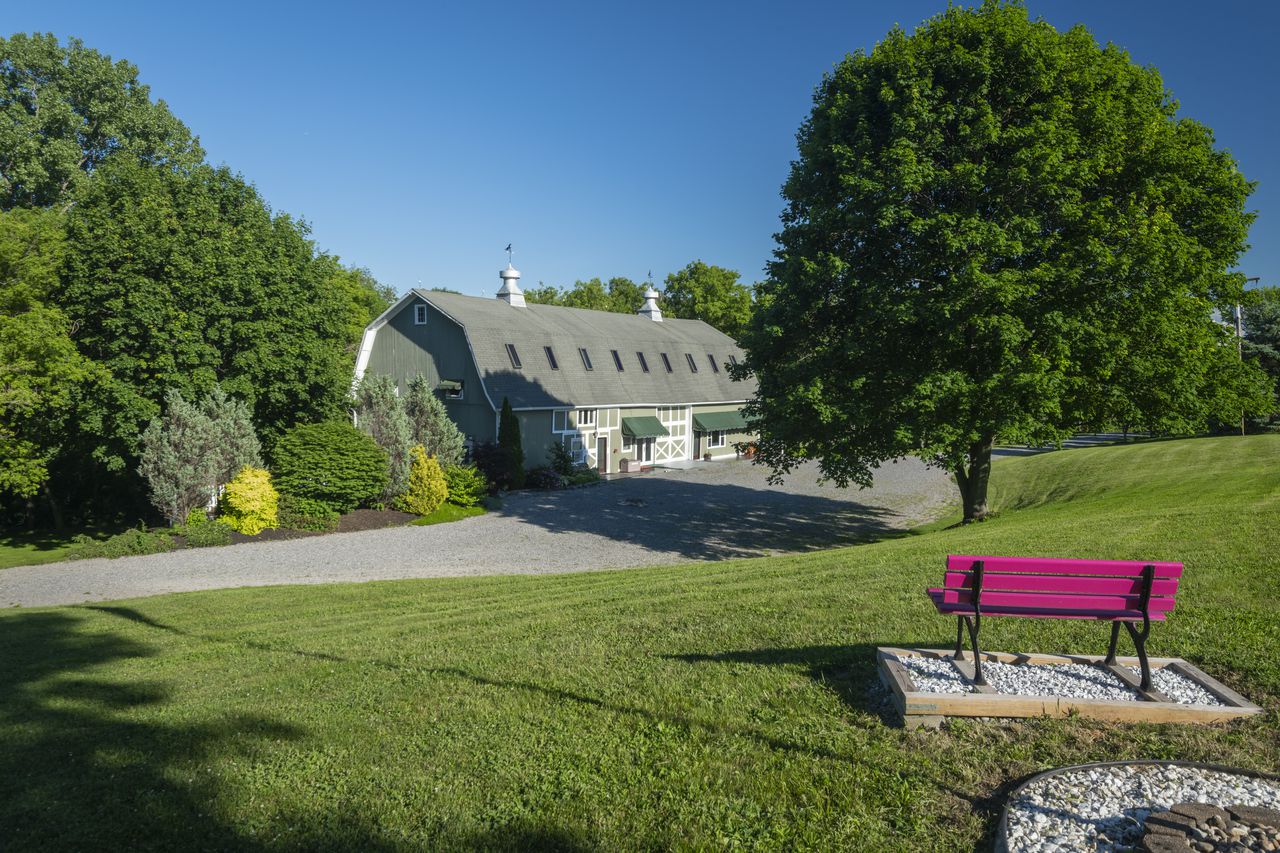 MARCELLUS, N.Y. – Bob Mescavage’s “Windy Acres” at 2295 Old Seneca Turnpike, near Marcellus, is one of the most unique properties in Central New York.

The local photographer would not want in any other way.

“Nestled” on the western edge of the village on 37 peaceful acres, the beautiful grounds are home to a four-bedroom, three-bathroom green barn structure, with over 5,000 square feet of living space, a getaway spot, featuring a pond, bunkhouse, and glamping tent, a hot tub under a gazebo, and a brand-new greenhouse.

It has also been a lot of work.

The barn dates back to the 1930s and Mescavage believes that it was built by Cornell University Architecture students. Three families have owned it since.

When he first saw it in 1999, it had been neglected for years. The barn had been converted into apartments. There were holes in the roof. Squirrels and raccoons lived on the third floor. Its grounds were overgrown.

But he saw its potential and just “how cool it was.”

The owner of the property lived in Chicago, and Mescavage happened to be in the city for a photo shoot. He made an offer at the Sears Tower and closed on the property in early 2000.

Then the work began.

A whole new roof was installed. Walls were knocked down, hardwood floors were sanded and restored.

He did so much work with sheetrock and framing that he said his hands were balled up into fists at night.

Outside, he planted trees, upgraded the landscaping, and put down “tons of stone” to replace the old dirt driveway.

Mescavage’s neighbors began to take notice at his improvements.

“You really turned the place around,” one said to him.

The barn and the property gave him the freedom to create a home which suits him and his lifestyle.

The open space allowed him to design a two-story photography studio, which can accommodate automobiles and motorcycles. The walk-out basement has a workspace room, sauna, and a workshop where he can work on his projects.

“I love my gym and sauna,” he said. “The workshop has come a long way. It was once just one bench.”

The charming bunkhouse near the pond was once used as an ice-skating shack. Today, it has electricity via solar panels, glass doors, and a small kitchen area. The bunk beds were built by Mescavage for his visiting nephews.

He also did the wooden bridges over the streams and the platform under the glamping tent which sleeps several people.

A new greenhouse, put up last summer, produced the “best garden” he ever had. He grew tomatoes, garlic, beans, eggplant, and zucchini.

Living alone with two dogs, he says the barn house has been situated to accommodate him, but he says it has “so many possibilities” that it could work for just about anyone.

The third floor, for example, has another 3,300 square feet of space which he left unfinished because he did not need it.

Mescavage says he has gone “full on” at his property for over 20 years.

“I kept moving on to the next project” and joked that he “loved fixing stuff up.”

“Windy Acres is big enough so that you never run out of projects,” he joked. “It was a labor of love.”

He plans to stay in Upstate New York and is intrigued about possibly living in the Adirondacks.

He already as some “non-cookie-cutter” ideas about his potential new property.

“I might build an observation tower on stilts above the tree line,” he said.

For more information about the property, please contact Realtor Peter J. Babbles of RE/MAX Masters. His contact info is below.

Monthly Mortgage: $2,876 (based on the national average rate of 2.80%, according to Freddie Mac on July 29, for a 30-year fixed-rate mortgage with a 20% down payment. Fees and points not included.)

Kitchen: Owner Bob Mescavage admits that the kitchen is “not huge,” but it works for him. “It is personal and functional,” he said. The stainless Wolff stove, and its hood and backsplash, are the focal point. You can eat at a counter which over looks the back patio and gazebo area or in open dining room, which has a unique gas stove.

Living areas: The barn-style home has 5,050 square feet of living space. It was renovated from having multiple apartments into a single-family home. The open living room and dining room look into the kitchen for an open feeling. The owner’s large, two-story photography studio can accommodate automobiles and motorcycles. There is an open space with high ceilings on the second floor which he used to house a golf net and for entertaining large parties. On Super Bowl Sundays he had tables of food and projected the game on the walls with surround-sound. The third floor has been left unfinished, except for fixing the roof. It adds more than 3,300 square feet of space and has “lots of possibilities.”

Bedrooms: The home has four bedrooms. The rooms are spacious, and each have their own closets. Mescavage uses two of the bedrooms as home offices.

Bathrooms: There are three full bathrooms in the house. The new owner’s bathroom has a walk-in shower unit, wooden vanity, and double sinks. A new guest bathroom has a pedestal sink and a bathtub.

Walk-out basement: The basement is “half-finished.” It is home to Mescavage’s gym and sauna. His workshop has grown from a single work bench into something much more elaborate. A full bathroom has been roughed in.

Outdoors: The property has over 37 acres and has “lots of privacy,” but is very close to the town of Marcellus. The green barn is eye-catching as soon as you enter the custom-built gates. The barn has a new roof. Over the previous 20 years, Mescavage has worked on improving the grounds, with new landscaping and planting trees. He enjoys sitting out late in the day and watching the “beautiful sunsets.” There is room to park four cars and “store a boat or two.” A patio area off the kitchen includes a gazebo and hot tub. The charming bunkhouse and glamping tent are near a large pond and provide a getaway for guests. A greenhouse was installed last year and produced quite a first harvest. There are benches and a fire pit found on the grounds. Mescavage leases some of the fields to a farmer who plants a variety of crops. There is an invisible fence for dog owners.

House of the Week: Owner feels ‘nostalgic’ after more than 25 years at Fayetteville home

House of the Week: Six generations of the same family have ‘treasured’ Oneida home since 1864

House of the Week: Renovated Chittenango home has it all, including 17 acres, energy-saving solar panels, and its own air strip

If you know of a beautiful or interesting house currently up for sale, please consider sending a nomination for it to be featured as a future House of the Week. Send an email with the listing to [email protected]

Do you know of any older homes in Central New York which have fallen on hard times but have a lot of potential should they be restored to their original grandeur? A fixer-upper with a lot of potential? Consider nominating them to our new feature, “Save this Home,” in which we will spotlight grand houses of the past around Central New York that need to be saved. Send nominations to [email protected]