interview with Mimi Foster, the realtor of the “slice of hell.” 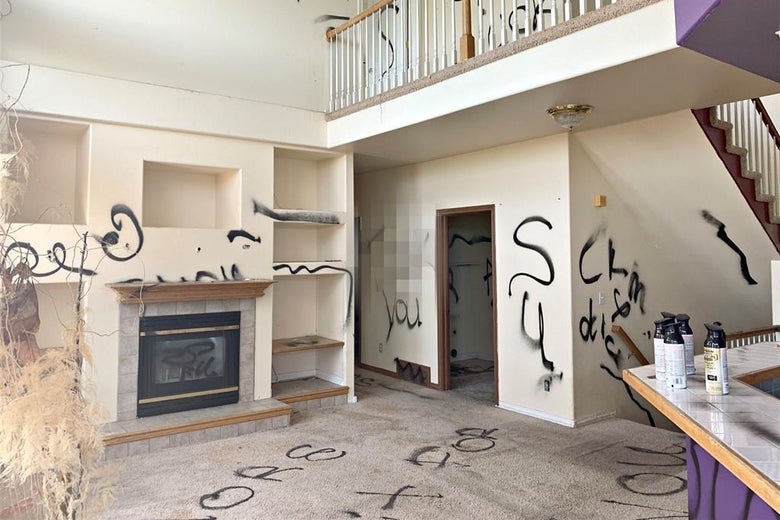 “If you dream of owning your own little slice of hell and turning it into a piece of heaven, then look no further!” So reads the real estate listing for a five-bedroom Colorado Springs house that’s been thoroughly vandalized by an evicted tenant. Accompanying the listing is an eight-minute YouTube video cataloguing the astonishing level of destruction inside the house—spray paint everywhere, feces and urine on the floor, dead cats in the bathroom. In the video, real estate agent Mimi Foster speculates that something suspicious happened with the tenant’s eviction, and pledges to dig into it further. I spoke to Foster—who had just finished leading a tour for local news cameras—about how to sell a house like this, the damage the housing crisis has done to landlord-tenant relations, her own side career as a romance novelist, and why her listing advises “DO NOT GO ON BACK DECK. DO NOT OPEN FREEZER IN BASEMENT.” Our conversation has been edited and condensed.

Slate: You were just talking to news crews?

Mimi Foster: My phone started ringing at 7 this morning and it hasn’t stopped. Yeah, KKTV was just here, the Denver Post, anyway … I hope good things are going to come out of this for my seller.

What was it like when you first walked into this house?

The first thing that you notice even before anything else is the smell. There’s a freezer that was full of meat that spoiled. I’ve been in there most of the day today, on and off, and—ugh, it’s horrible, we had to keep walking outside to breathe.

Usually a video tour on a listing is meant to sell the attributes of a house, but yours seems to be telling a story. Why is that?

I am an author. I write novels. And I’ve been doing real estate for about 30 years now. And I realized a long time ago that people want a story. And holy cow, this one has a story. I don’t want anybody coming in here expecting it to be a real home! It’s not! And it’s gonna take a hundred thousand to make it livable. Minimum. I wanted people to get engaged with the house. I have people calling me today saying “I’m not looking to buy a house, but can I come see this one?”

You’re telling them the smell’s not worth it, right?

I’m sitting in my car with the AC blowing straight at my face to get rid of the smell.

Plus you had to be inside the house to make the video.

I made that video a year ago and we just put it on the market yesterday.

We’ve been trying to get somebody to pay attention! This all happened right before COVID. The insurance company said, “Too bad, so sad, we don’t cover vandalism.” Pardon me, but—what the fuck?! What do you cover?

The house was going into foreclosure in the next two weeks. Banks have been on a foreclosure moratorium nationally. This house has been part of this moratorium, but it ended on June 30 and they said the owner only had two weeks. I said, “We are in the most insane market. If it’s ever gonna work, it’s gonna work now. Let’s just throw it on the market for what you owe on it.” Well, the bank contacted the owner last night and said that they were delaying foreclosure now. Is that because it’s gone viral? I don’t know.

A year I’ve been dealing with this! It’s such a serious issue but it’s really funny, you know. You gotta laugh at it or you would just sit in the corner and cry.

It’s tragic. It’s tragic on a lot of levels. The owner is sick, she lives out of state. She hasn’t seen the house in over 10 years. The tenant was evicted in the fall of 2019. And there was a property manager then, and the property manager wrote the owner and said the judge is going to let the tenant back in because she’s gonna go get her stuff, but she will be supervised. And so they let her back in, and it was in that few-hour window that all of the destruction happened.

What happened to the supervision?

Right? No court in the land would have let that woman back in there without supervision. So then the property manager called the owner and said, “There’s been some destruction.” She called me and said, “I want you to list my house,” and I was all excited, right? And then I found it.

Oh, no, were you the one who discovered the cats?

Oh, my God. It was awful. In the irony of ironies, this woman ran a pet shelter.

Out of the house?

Yes. So why did she lock the cats in the bathroom when she came back?

You describe the situation as a landlord’s nightmare. You’ve also been a landlord. What do you think went wrong in this relationship?

“Is it a wise investment? Don’t ask me that.”

I mean, I don’t have the tenant’s medical records, but she was crazy as a bedbug. The neighbors were afraid of her. When she found out that she was actually going to be evicted … the stuff on the wall is very personal against the owner. “EVICT THIS, BITCH” and “WHO ARE YOU GONNA RENT THIS TO NOW, SUZY.” So definitely a personal attack, but I think it was because she was being evicted. She had no place to go.

It seems like it’s sort of a housing crisis story as much as anything.

She was evicted long before COVID. She hadn’t been paying rent in months. It never came down to that.

OK, looking at the listing … why can’t people go on the back deck?

Because it’s falling off the house. The tenant probably had nothing to do with that. It’s just neglect. The house has been vacant for a year and a half.

It seems sorta crazy to spend $600,000 on a house you wouldn’t even want to go in. Who’s the right buyer for this house?

An investor who’s gonna fix it up and resell it to somebody who will live there. The 600K covers the mortgage that she’s behind on and the liens that are on the house.

If this house is in good condition, what does it sell for, in this neighborhood?

Realistically, 700. So is it a wise investment? Don’t ask me that.

So the buyer needs to be adventurous.

Yes! And quite frankly I was hoping that people would come out of the woodwork that wanted to help. Obviously this has gone viral. I haven’t seen any of it because I’ve been out all day.

In the video you said, “Something smells worse than the odor in this house, and I intend to pursue it.” What are you looking for and have you found it?

Let me tell you that, before you, I was on the phone with the property manager. She calls me and says, “Is this Mimi?” And she identifies herself, and I said, “Isn’t it amazing that I’ve been trying to call you for over a year and finally you’re returning a phone call.” And she said, “What makes you think that I ever had anything to do with this house?” And I said, “How about this stack of emails that I’ve got with your name on it?” She said, “I’ll see you in court, and the next time you hear from me it’ll be my attorney!” So … no, I don’t think I’ve found the answer yet.

You’re an author, so you must admit there is real drama here.

Real drama! I have all the emails! She doesn’t scare me.

Tell me about the books you write.

What’s the happy ending for this house?

Oh, you’re good. It was a beautiful house. The happy ending is that the owner is made whole, and someone restores it, and a family moves in. That’s all I want.