Pennington Off-Grid House for Sale, A First Of Its Kind 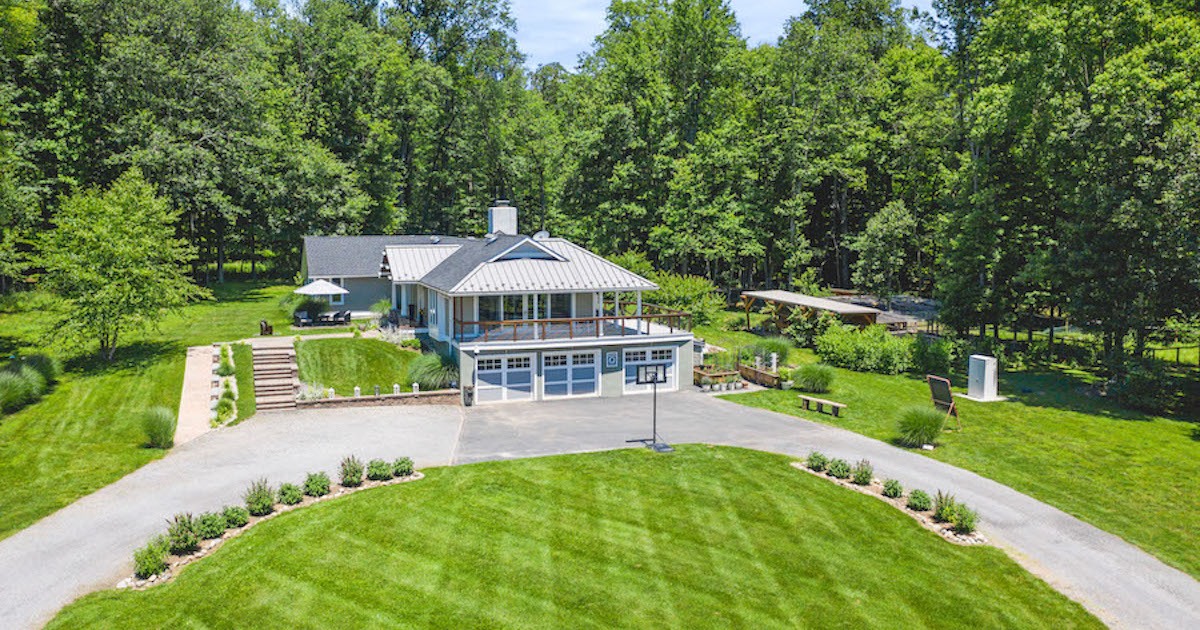 This house is the first of its kind in North America — it produces all the power it needs from 100 percent renewable sources. (And on days when it generates more than you need, you can sell the excess to PSEG.)

Sign up for our weekly home and property newsletter, featuring homes for sale, neighborhood happenings, and more.

Looks like a typical upscale contemporary house, doesn’t it? Aside from its stylish design, there’s nothing typical about this most unusual house at 93 Woosamonsa Rd., Pennington, N.J. 08534 | Photos: Oskar Mikols via Dave Marcolla Group, Keller Williams Luxury Realty and *Bright MLS except as noted

The main end of the more radical environmentalists is to get all of us to “live lightly on the earth.”

She did this by converting what had been a 1975 rancher into the first fully self-sustaining, off-the-grid traditional house in North America in 2015. 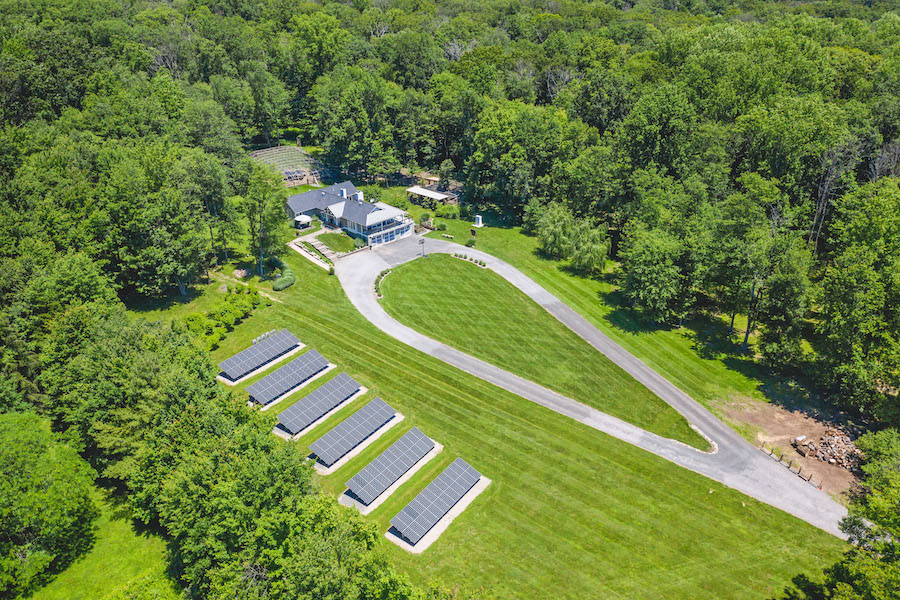 “Sustainable Acres” was the proof-of-concept project for the Hydrogen House Project, an environmental outfit that promotes the use of clean, renewable energy sources.

This fully-loaded, strikingly attractive modern house and its chicken farm run entirely off of a 40-kilowatt solar array, which you see to the left of the driveway in the photo above. 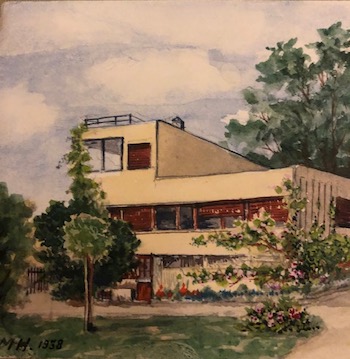 De Tiberge, who comes from a Swiss family with a knack for living on the cutting edge — her grandfather lived in a house outside Geneva whose design was conceived by Le Corbusier in the late 1920s — had already converted one house she had lived in to solar power, in Skillman in central New Jersey.

But, she says, she didn’t achieve her goal of having a totally self-sustaining house. “That’s not the only thing you must have,” she says of the solar panels. “Because when you have a sunless day, or a flood or a storm that blacks out the city for a week, which happens quite often in the U.S., you’re not covered [with backup power].”

The usual solution to this is a backup battery, which she has. But for this house, she went the battery one better by installing a hydrogen generator and fuel cells. The solar panels supply electricity to both the house and an electrolyzer that splits water molecules into hydrogen and oxygen atoms. 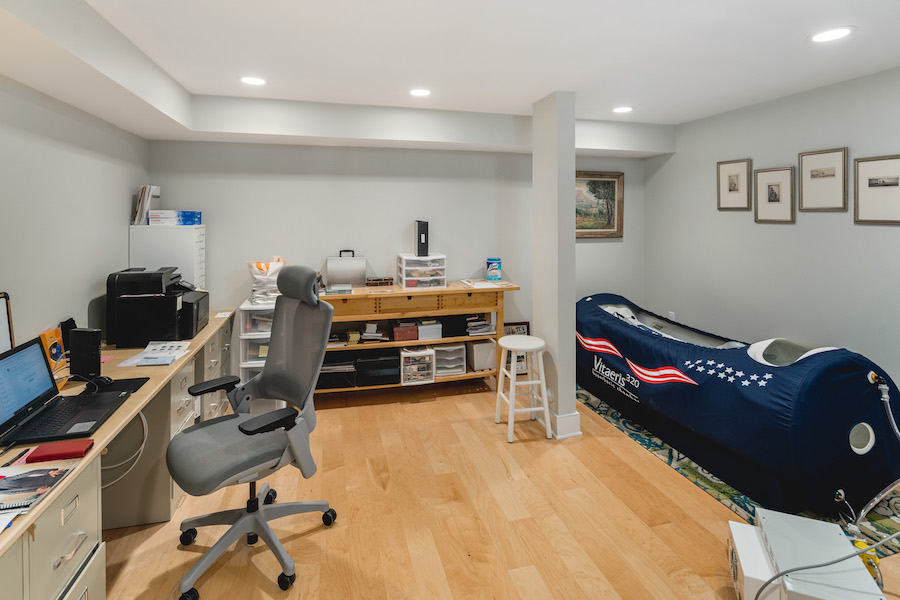 The hydrogen is stored in an underground tank on the property, and the oxygen gets fed to a hyperbaric chamber in the basement home office. 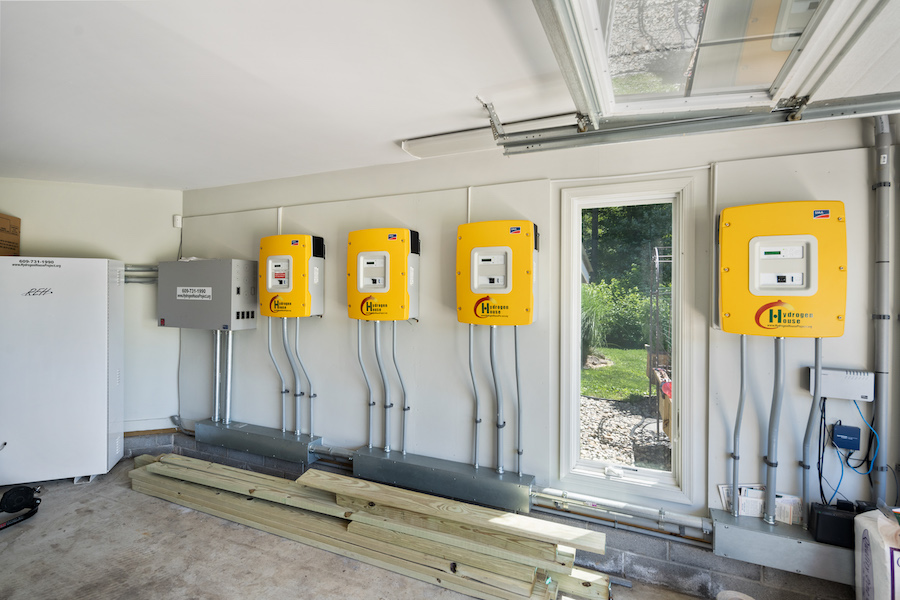 The hydrogen passes through fuel cells in its three-car garage that recharge the backup battery, furnish supplementary power to the house and power a hydrogen-powered Toyota Mirai. 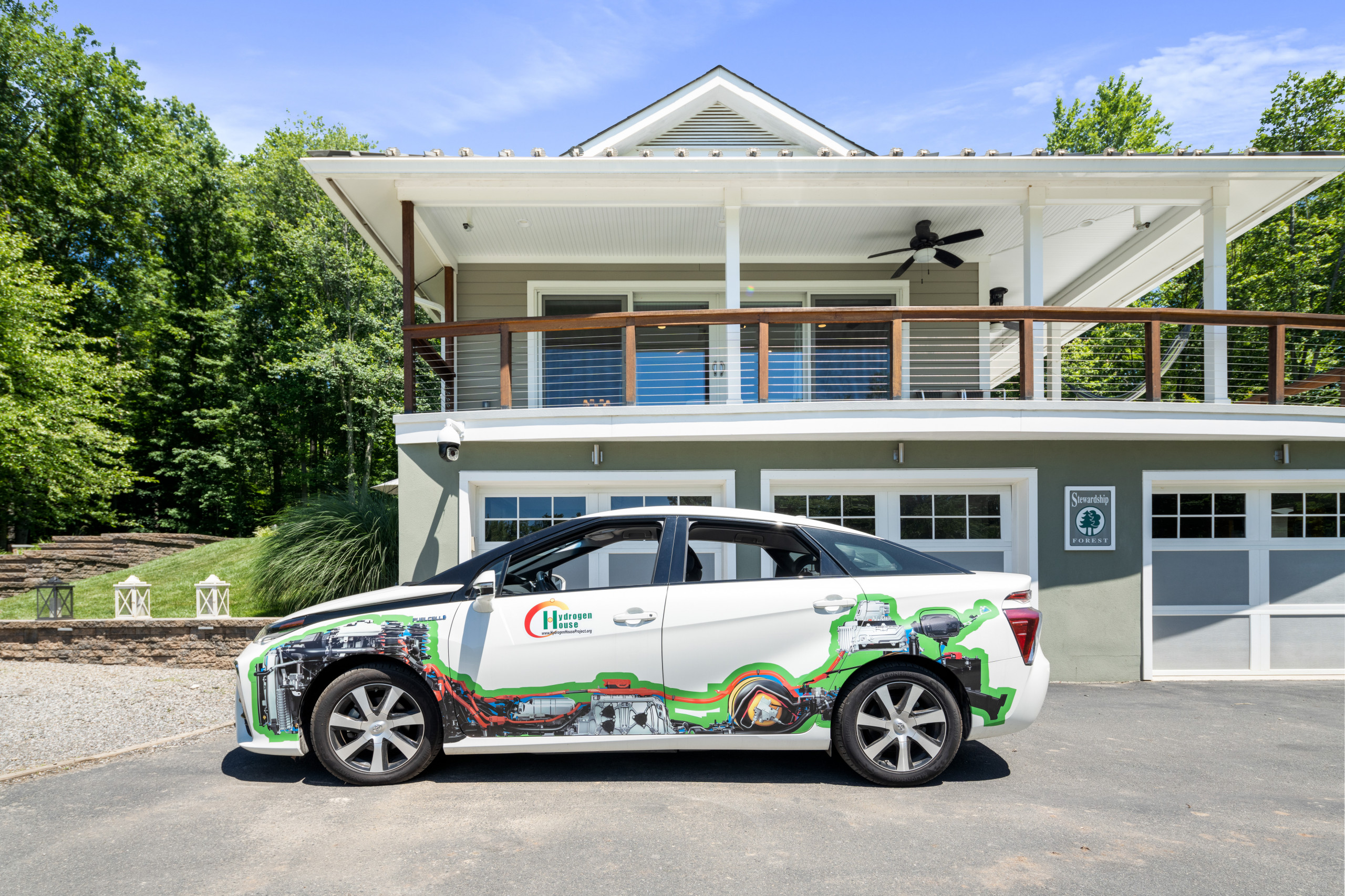 “Then, when we have a blackout, and PSEG has [one] too often,” she says, “it automatically kicks in to recharge the battery.”

And, of course, the exhaust from a hydrogen fuel cell is pure water, so this house runs entirely on green, pollution-free power. 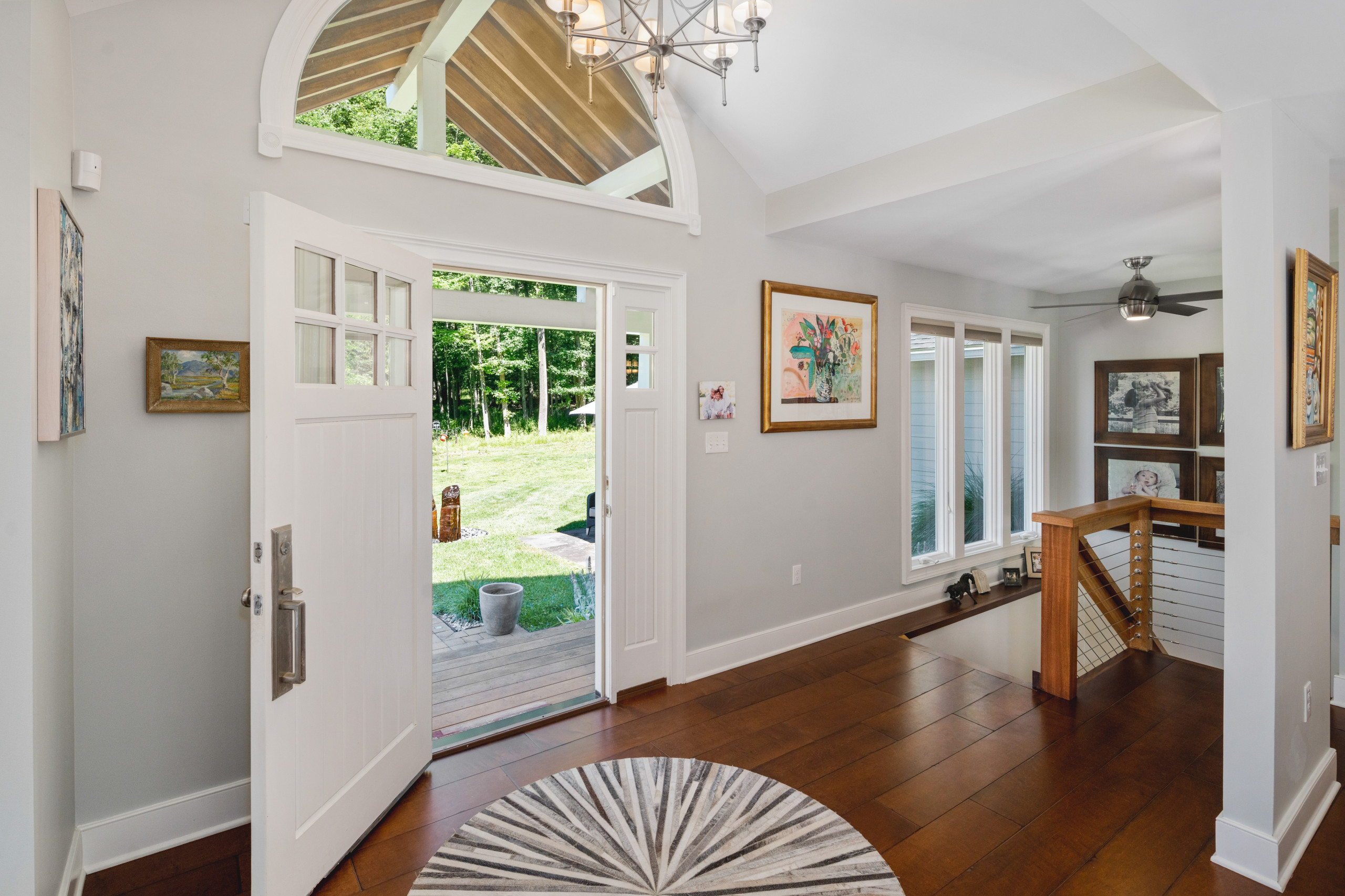 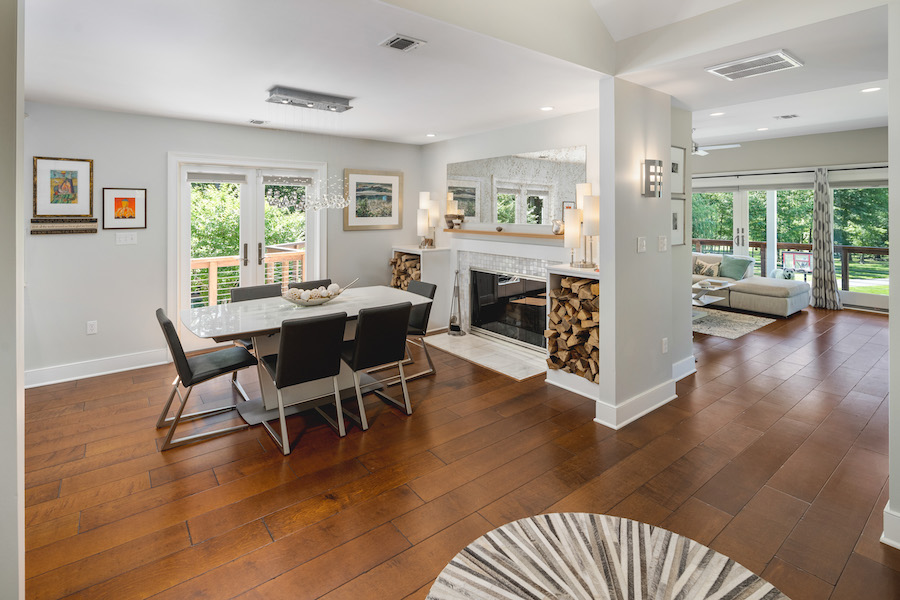 Almost. On those chilly winter nights, De Tiberge — and you, if you buy this Pennington off-grid house for sale — might toss some firewood into the double-sided fireplace between the dining and living rooms. 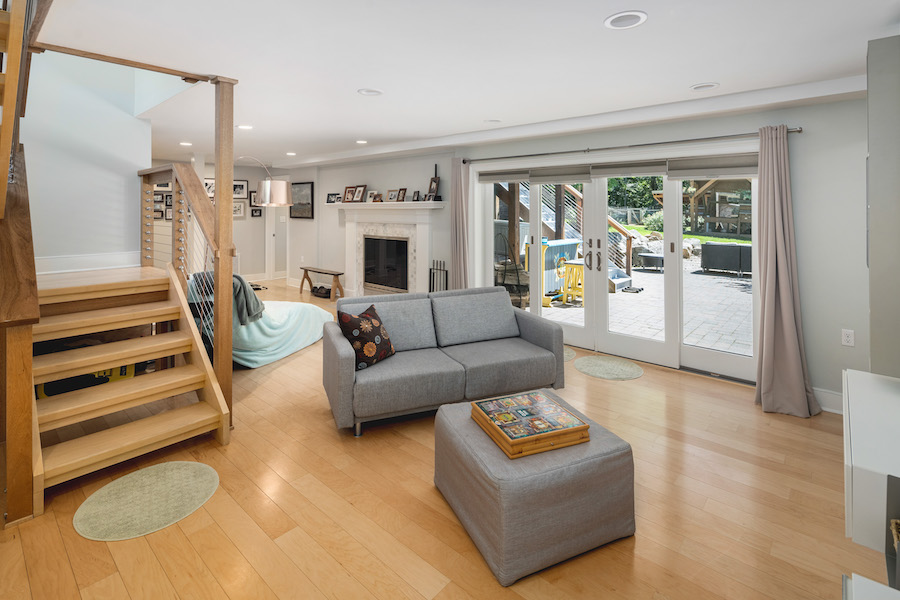 The house also has a fireplace in the basement rec room. Everything else runs off electricity, and it’s designed not to use lots of it.

All the lighting, for instance, is LED. 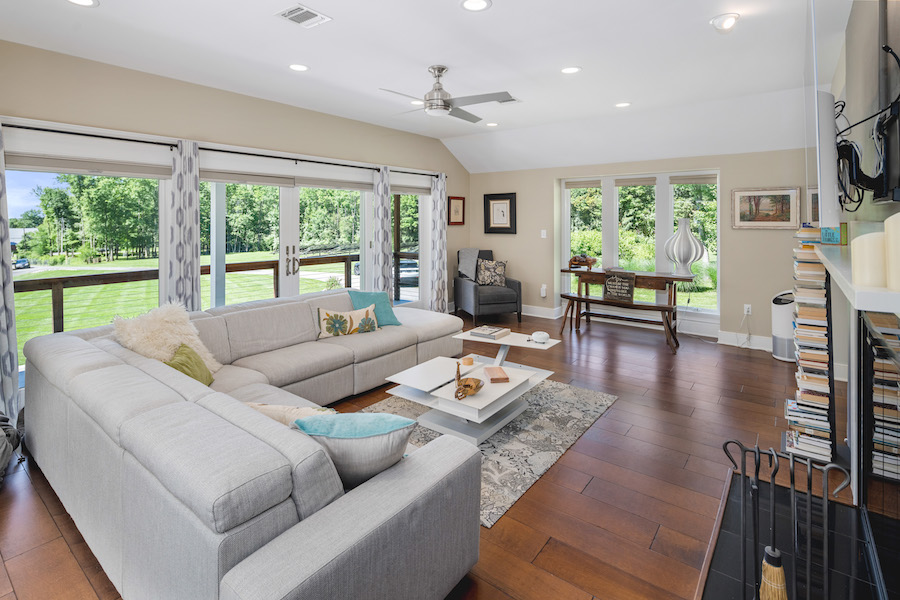 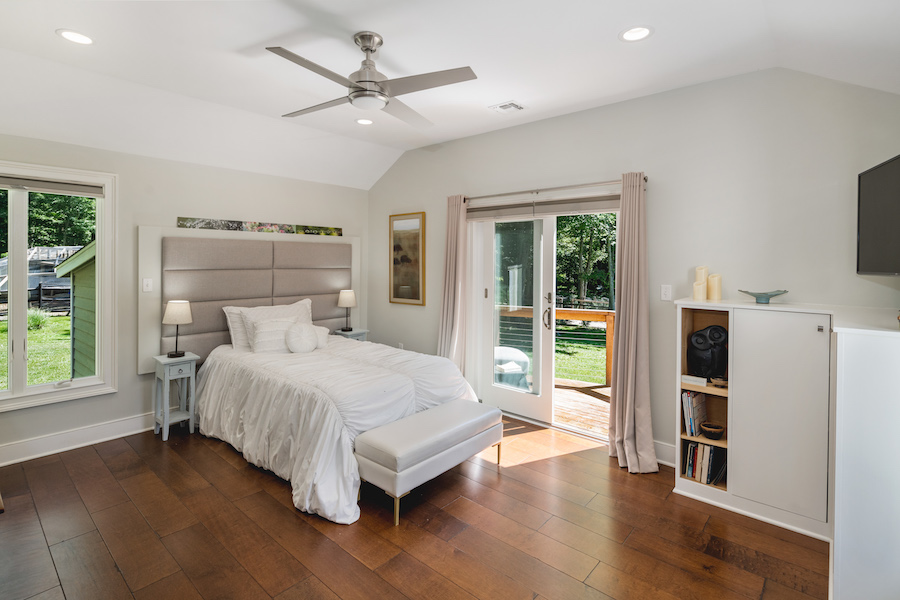 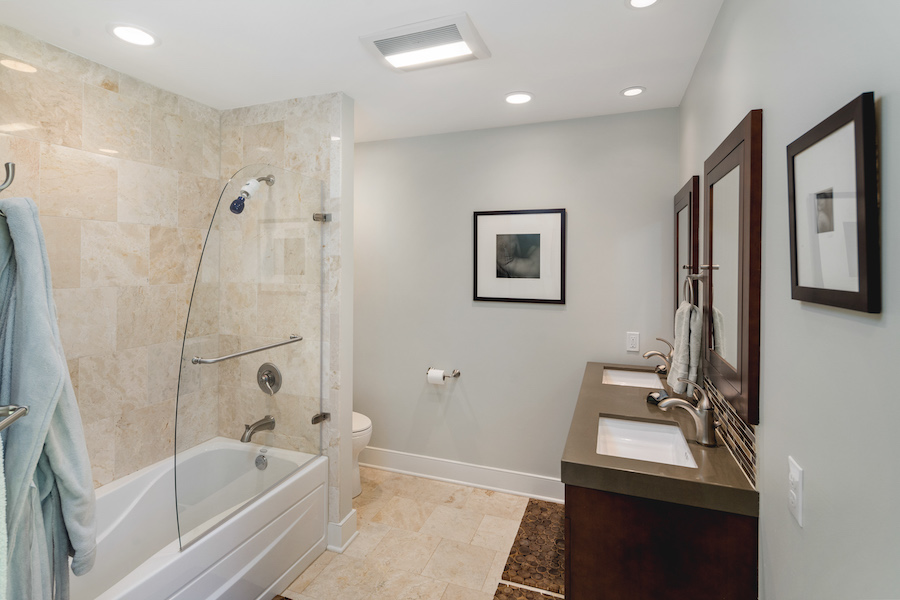 Primary bathroom; the blue attachment to its shower head realigns the molecular structure of the water

The ceiling fans in the living room and bedrooms help the heat pump climate control system operate at maximum efficiency as well. Solar-powered fans in the attic also help keep the house cooler in summer. 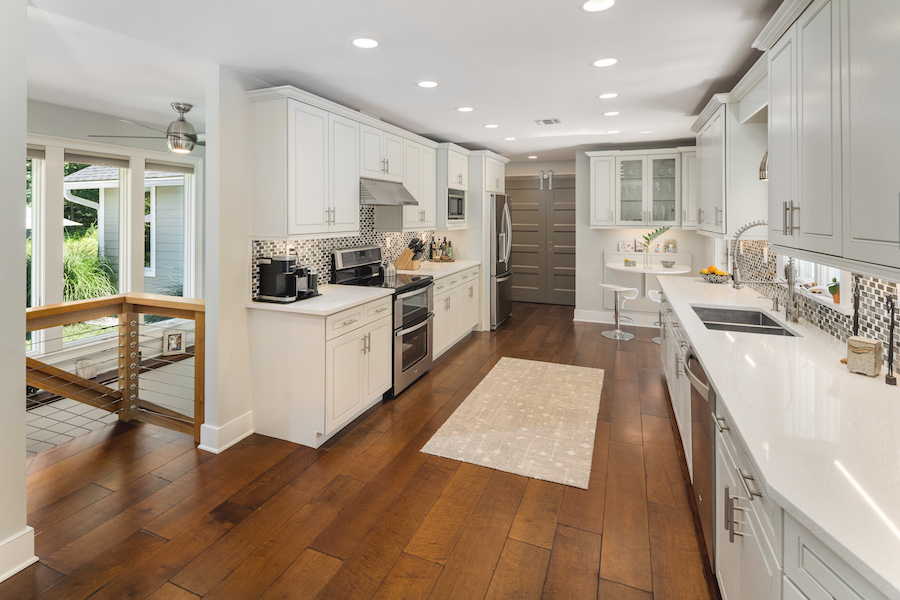 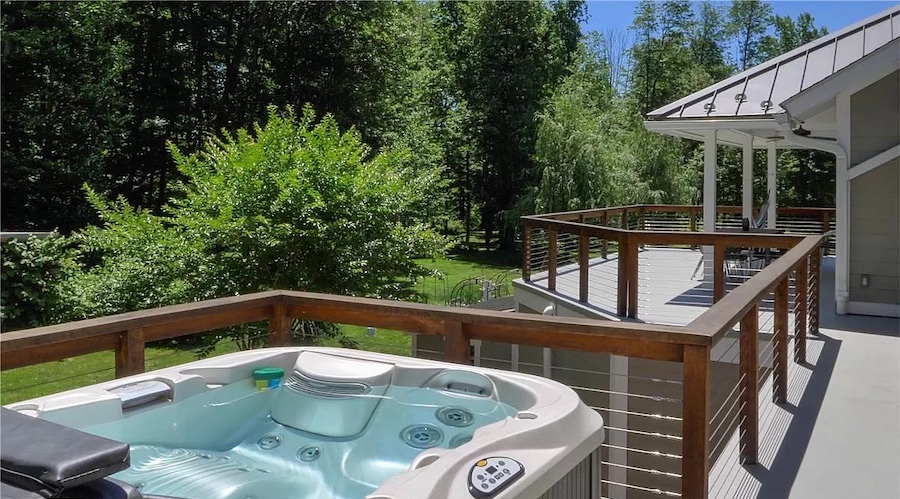 Quite likely, the real energy hogs (if hogs they are) in this house are its two water heaters, its induction range, its refrigerator-freezer, its dishwasher and the Jacuzzi hot tub on its wraparound main-floor deck, which extends all the way from the living room around to the primary bedroom. 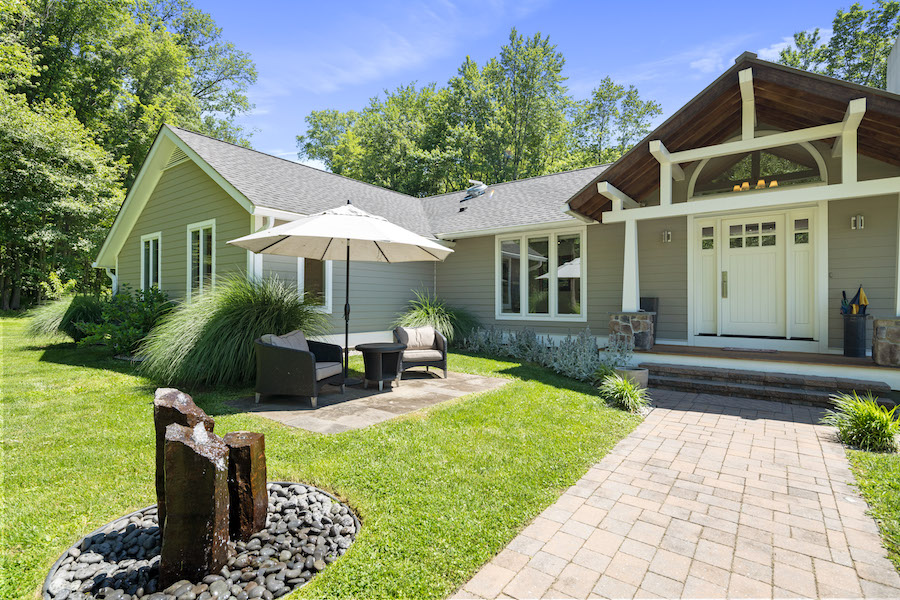 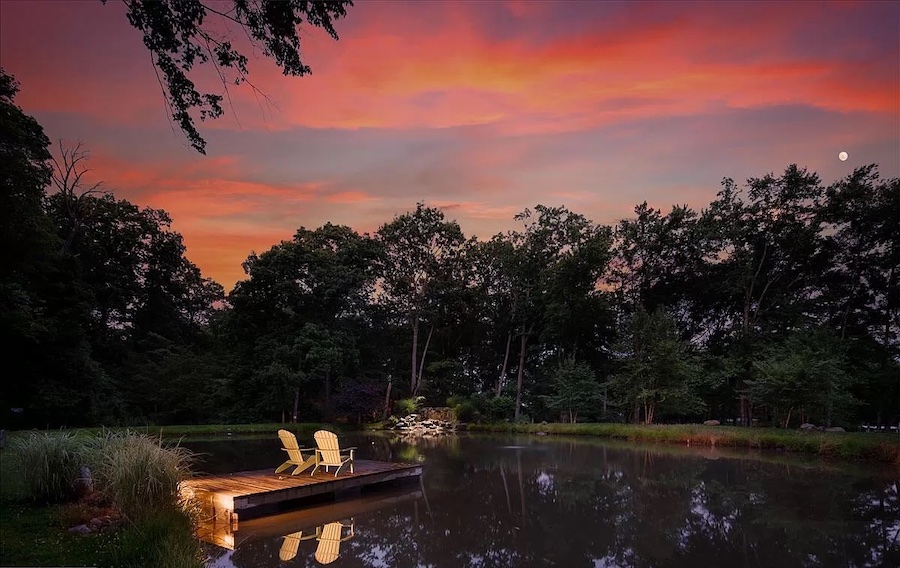 Pond, dock and fountain at night*

There’s a small fountain next to the front terrace and another one on the pond that sits at the entrance to this farm.

To get the state permits needed to build and equip this house, De Tiberge had to calculate exactly how much electricity they all used. “Because we had to go through all this, the state allowed us to have almost 40 kilowatts” of generating capacity, she says.

Even though this house powers itself and doesn’t need to be connected to the grid, it has a connection nonetheless. “The government demands that you install a meter, and they come to read it every month,” she says. The reason why?  If this house consumes less power than it produces in any given month, PSEG buys the surplus and pays De Tibarge.

You will operate under the same agreement, known as a Solar Renewable Energy Certificate, or SREC. SRECs were certificates created to encourage electric utilities to up the percentage of power generated renewably by enabling home and business owners to sell surplus energy to the utility. The grid connection is necessary for the certificates to be valid. 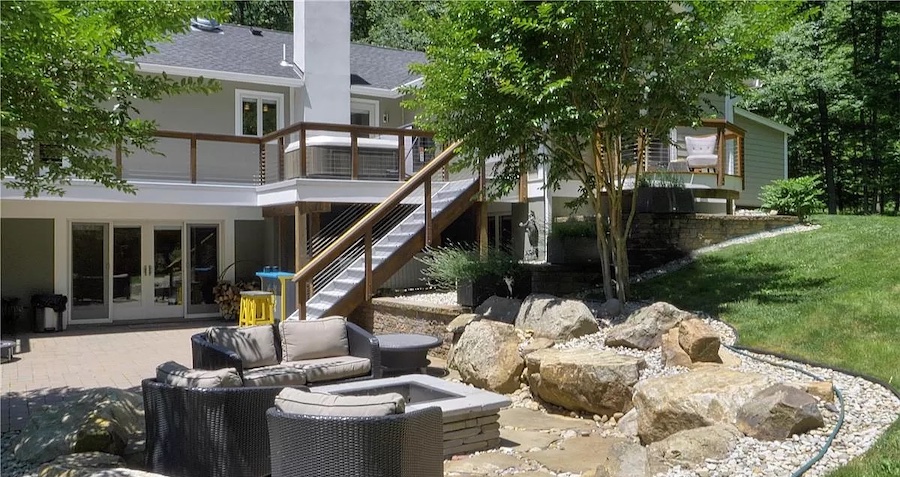 The certificates issued for this house are good for 15 years, which means more than seven years remain on them. De Tibarge says the roughly $10,000 in payments she gets each year from PSEG save her about $8,000 a year in energy costs. I didn’t ask her what it cost to install the power systems, but I’ll bet the savings have already covered the cost of installing the solar panels, hydrogen generator and fuel cells.

And as the pictures here should make clear, those power systems fuel a very stylish, well-equipped and luxurious residence. This mix of contemporary and Craftsman style boasts high-grade, low-maintenance materials throughout: mahogany beams on its portico and railings on its decks, maple flooring, quartz kitchen countertops, marble tile in the bathrooms, HardieBoard siding on the exterior.

And it’s set up to support a work-from-home lifestyle, which also means savings on fuel for travel and commuting. (You could, if you wish, convert the home office into a fifth bedroom. But since you’re buying a working farm with this house, you should keep that room an office in order to take the home-office income tax deduction.) 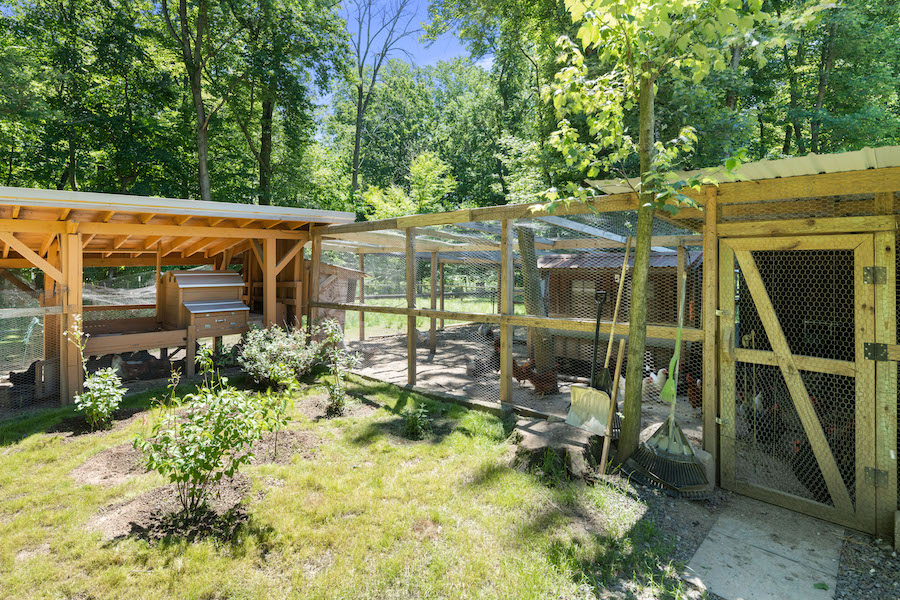 It also comes with two other sources of income: firewood from the forests on the 11.1-acre property and eggs from the free-range chickens she raises. The coops and roaming grounds are covered with wire mesh to keep out predators and can support 110 chickens. 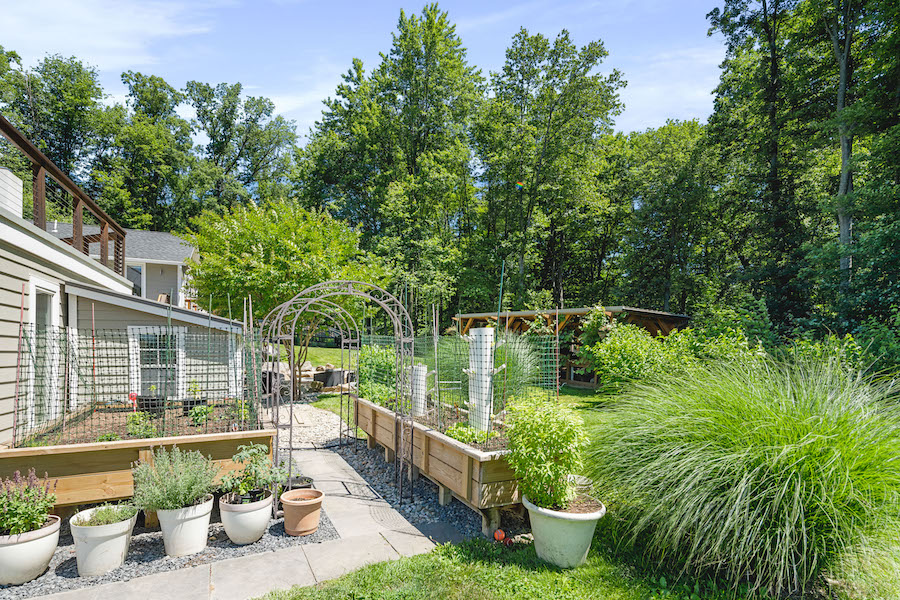 There are also raised planting beds next to the basement terrace. This means you can also save on groceries by growing some of your own produce and herbs.

And to top it all off, everything that I’ve mentioned and that you see in these pictures except for the artwork and personal effects comes with the house: The chicken farm and its chickens, the firewood operation, the furniture, the appliances, the window treatments, the hyperbaric chamber and its oxygen concentrator, three farm storage sheds, an electric-powered Kubota tractor and that hydrogen-powered Toyota.

OTHER STUFF: This property is also covered by farmland and forest stewardship easements that keep its property taxes lower than they otherwise would be. That’s another incentive to hang onto those chickens and sell that firewood.